I (Adam) have published my directional trades daily since 2010. This performance record is a reflection of those trades as-published. Over that period of time, through a range of market regimes, the set of trades never had a losing year.

Please note the obvious and typical disclaimers apply, and they deserve some thought: Past performance is no guarantee of future results. These should be treated as a set of theoretical trades, and theoretical/modeled trading programs are subject to limitations. An example of such a limitation might be that they failed to account for, or over accounted-for certain market conditions such as liquidity. We are making no representation that any account has achieved these results, rather they are representative performance of a set of trades. 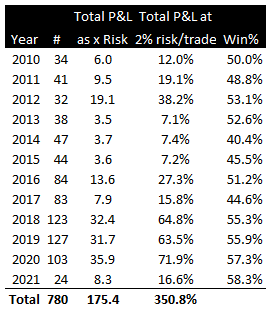 The table above shows the performance of my published trades. Total R is the performance as a multiple of the initial trade risk on each trade. (I.e., if risking a 2% market move on a position, an overall profit of 2% would be 1R. An overall profit of 1% would be 0.5R, etc.) P&L at 3% risk shows the uncompounded return on a portfolio risking 3% of the portfolio on each trade. Win% shows the percentage of winning trades for that year. 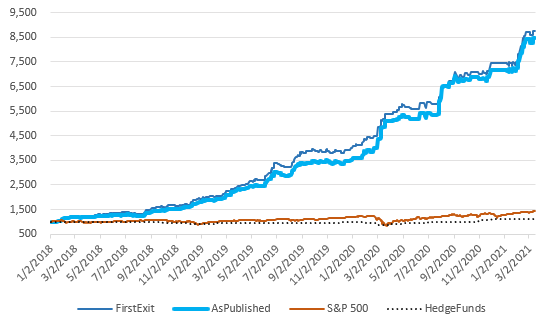 The chart above shows $1000 invested in a portfolio trading these trades, risking 3% per trade, against both the S&P 500 and the Barclay Hedge Fund Index, equity curve starting in 2018. The published trades are presented in two formats: “AsPublished”, which is exactly what it says: each trade is published with an initial stop and initial target. Half the position is taken off at the first target, and the stop is tightened on the position. The trade may be exited all at once at the trailing stop, or in two pieces at the profit target and against the trailing stops.

The “FirstExit” line shows a different, simpler way to trade these trades: simply take the whole position off either at the trailing stop or at the initial profit target. While this, of course, means you will never be trailing a stop on a big winner, the tradeoff is consistency and slightly higher overall profitability.

These trades show how the sometimes abstract ideas in my work and research can be actualized into concrete trading ideas—this is why we call these “model trades” or “example trades.” The performance of this set of trades at least strongly suggests that there is an edge to our work and analysis.