The published trades are not intended to be a “follow me” set of trades. It is our belief that no one achieves long-term success in the market by following anyone else. Rather, you will find your success by incorporating tools and perspectives into your own process—making them your own—and then accepting full responsibility for the outcomes.

To that end, our clients have adapted these trades in many ways. We have clients who, for instance, have used entries more or less as published and modified exits, who have used our trades as context and bias and then traded within those biases, or have even used (a profitable) set of trades in a contrarian perspective, by taking the opposite position on exits.

We clearly publish entries and stops in advance, often for many days. The first target is easy to calculate, as it is always set at an equal distance on the “other side” of the entry from the stop. (E.g., if entering long at 100 with a stop at 95, the target would be at 105.)

The actual entry to these trades requires a degree of finesse in some cases. We are not a “live trade” service, so we do not tweet or text entries. Because we are bound to publishing the day before, we include a condition of “entering on a strong or weak close”. The intent is to not take entries on reversal days, which can add significantly to the bottom line. Though there is a degree of subjectivity here, the main points we are looking for are consistent and most clients find they can quickly and easily assimilate these ideas into their own trading.

Now, what we are trying to do is to enter with the short-term momentum above that level, so we want the trade to be supported by at least short-term price action. Here is a textbook example of a strong close above the level: 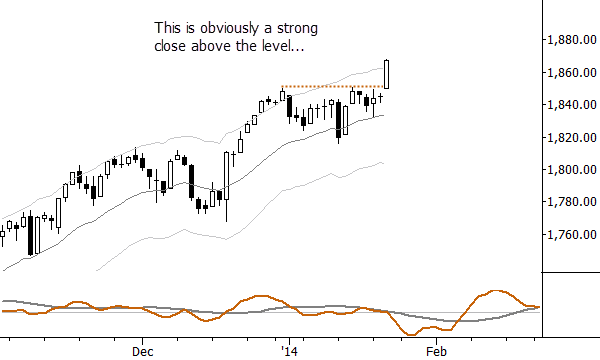 On the other hand, here is a weak close that is actually a failure at the level, and is exactly the kind of action a bullish trader is hoping to avoid. (This price action might actually support a short entry against the level:

These examples are obvious, but they are good to keep in mind as examples of the best and the worst possible entries. In between might appear to be more confusing, but we can easily define guidelines. There are factors which would contribute to a strong close:

Armed with these three, relatively simple, factors, it is easy to tell strong closes from not-so-strong closes. There still could, potentially, be the rare situation where our assessment in our report is different than your own. There are several ways to deal with this (again, uncommon) situation, and we can best address this with some practical execution tips:

We typically trade off of stop levels (for entry), confirmed by some degree of price action above the level. Our clients actually execute these trades in many ways, depending on their trading style and ability to actively manage. Some examples:

This is an element of trade entry and exit that requires some finesse, but it does not require that you are glued to the screen. Depending on your desire to trade activity, you may choose a range of options in execution, but the idea of confirming an entry with short-term price action is critical for swing trades lasting less than a month.

A target and stop are listed for every trade. The stop will never be moved past that initial stop, so the total risk in the trade (except on a very large adverse gap or other market distortion) is clearly defined.

The stop may be moved each day, and, if so, will be clearly highlighted on the trade grid in the report. The trade is exited without question if the stop level is hit. (Here, again, some traders may wish to execute stops differently, whether using intraday price action, stop-close-only orders, or other variations.)

Once the target is hit, the position is marked as reduced to ½ size, but clients may and should adapt this aspect for their own situation. There are a wide range of possibilities, from taking the whole position off to not taking any, depending on your trading style and investment mandate. When the target is hit, it is removed from the daily trade grid, and only the trailing stop is used to manage the position.